My patchset on dir-iterator and local clone was merged into pu. :) And the problem with st_ino could be solved combining it with st_dev (I’m still going to confirm if there’s anything else I should do, thought).

CallPath - paths in a call graph

Last week, I missed some tool which could tell me, given a function F, every path in a call graph that lead to F. I needed that, between other use cases, to ensure that locking a mutex at a function A, I’m guaranteed to still have it at another function B.

So, with Christian’s help, I coded a tool called callpath. It executes a command in gdb, collects and parses its output and plots all the paths to an specific function using dot. As you’ll see, callpath was used a couple times throughout this post to validate some assumptions.

We’ve already seen in my previous post that zlib inflation showed itself as the perfect candidate in the pack access code to be made parallel. But I was having some deadlock and SegFault errors when trying to implement it, last week. So I started over from scratch with the simplest idea possible (based on the previous ones). It goes like this:

We know pack access is not thread safe, so let’s add a mutex protecting read_object_file_extended(). This is git-grep’s only entry point to the pack access code, so it is the only function we care, for now.

Now that we have a “thread-safe” read_object_file_extended(), let’s remove git-grep’s read lock. This is not as simple as it seems, thought, since the lock not only protects object reading but also submodule and textconv operations. As the idea is to start simple, thought, let’s ignore those two other critical sections, leaving them unprotected, for now.

Ok, but two unprotected non-thread-safe sections seems a little dangerous, right? Well, for the test cases I’m currently running, callpath shows that these two sections are not even being executed, so we’re safe. But that’s certainly something I’ll have to handle before the final version.

We know that git_inflate() is the function responsible for handling zlib inflation. So if we can guarantee that the lock added at step 1 will be held by a thread when it gets to git_inflate(), we can safely unlock it at the beginning and re-lock at the end. That way, we could safely allow threads to work at inflation in parallel! And indeed, as you can see here, callpath confirms git_inflate will only be reached (in my test cases) through read_object_file_extended(), which holds the lock.

Ok, the idea per se is quite simple, the hardest part was debugging and confirming those safety issues about unlocking and re-locking. You can see a hacky implementation of it here.

And calculating the mean of 30 repetions taken before 2 warmup executions1:

Ok, we can already see some good results, but Gentoo is a quite small repo. So I also wanted to test with Linux and Chromium. But with them, I started to get Segmentation fault, again! It always happens in the following call stack: (most recent call first)

I’m still trying to figure out the cause of this problem, but I have an educated guess based on what I’ve investigated so far. We can think of git-grep’s threads, regarding object reading, like this: 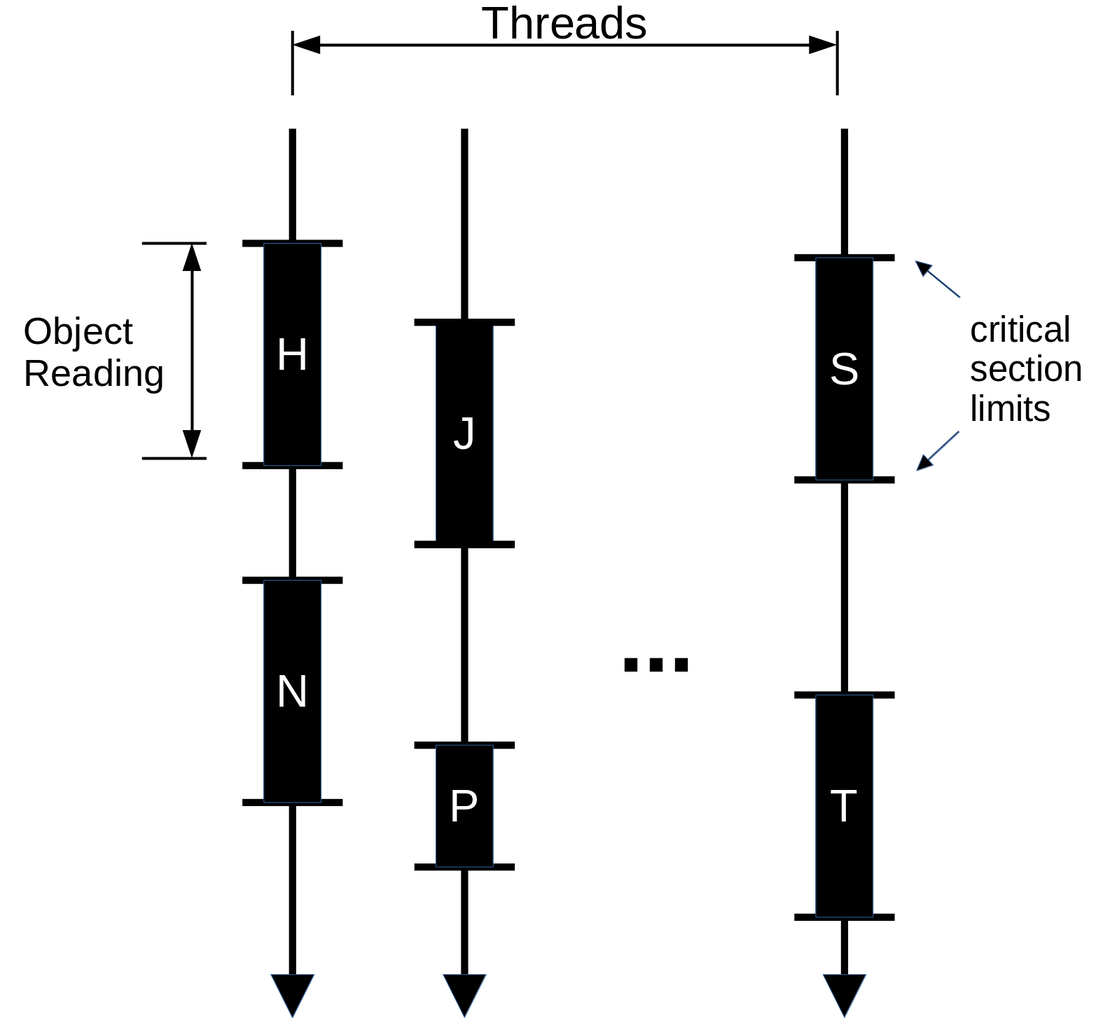 And the order in which these critical sections (H, N, S, ...) will be executed doesn’t matter (remember they are serialized).

But when we break this critical sections, to allow parallel inflation, we end up with something like this: 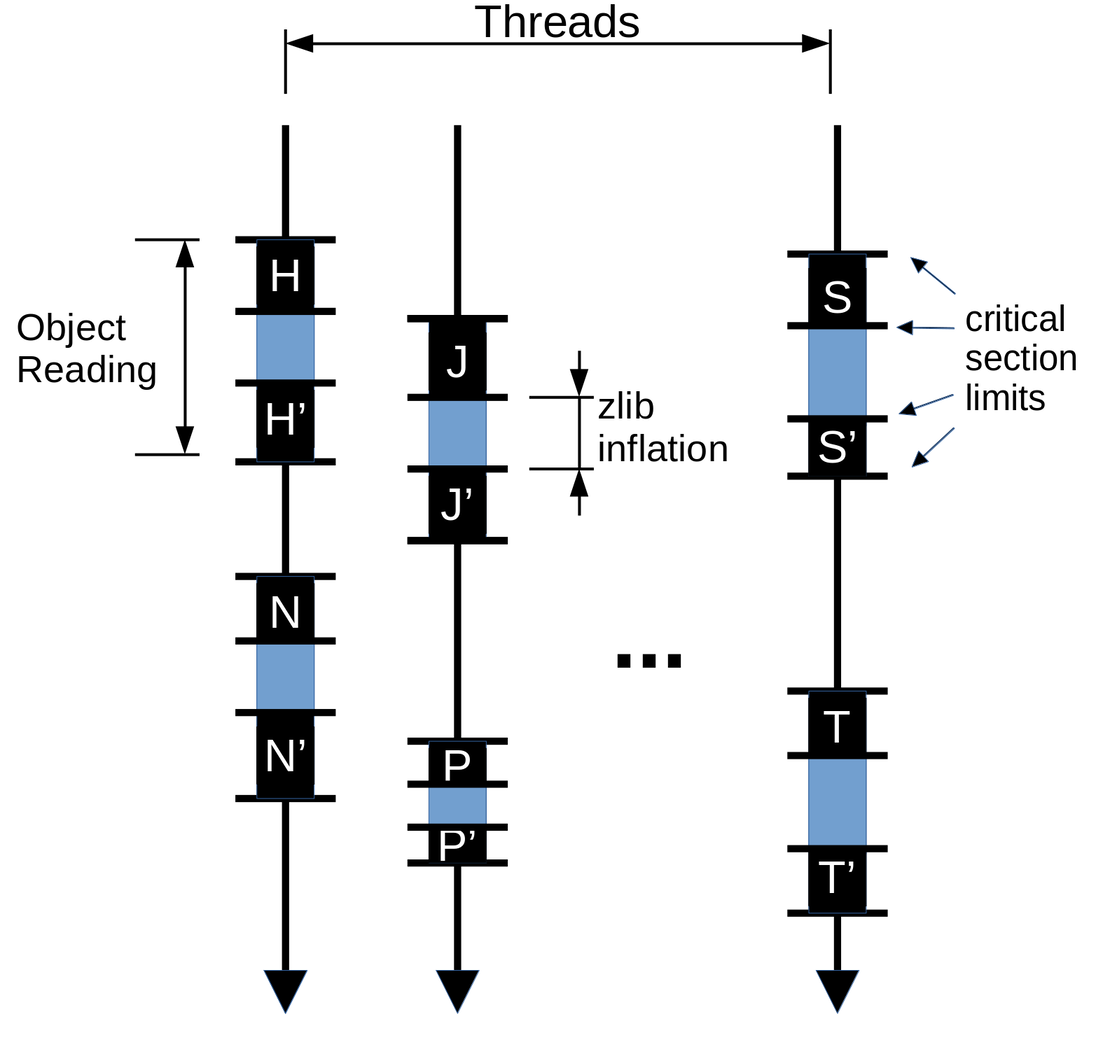 And at this time, there’s no guarantee that N' will be executed right after N, for example. So we may have an order like this: N, S, S', N', .... And now, S, may change a global variable which N' is already expecting to have a certain value set by N. This may be the reason of the SegFaults when handling the delta_base_cache.

It does make sense because if the cache is full when adding a new entry, it may be necessary to remove the least recently used entry (or entries). So intercalating N and N' with other critical sections may remove an entry which N' expects to be present. And indeed, increasing core.deltaBaseCacheLimit made the parallel-inflate version work on the Linux repo, corroborating with this guess. But I’m not sure, yet, if that’s the case and, if so, how we could prevent it from happening.

Til next time,
Matheus